The Medicinal Chemistry Core Facility is a 2000 sq. ft. state-of-the-art technological center located on the west campus of UTSA that performs all necessary chemistry and synthesis services to support a large diversity of small molecule drug discovery efforts.

The center will provide custom synthesis and medicinal chemistry research for small molecule drug discovery projects in any therapeutic area. The center will also provide collaboration, consultation and program strategy opportunities from investigators who have over 17+ years of pharmaceutical experience in taking small molecule compounds through all stages of the pre-clinical drug discovery process. 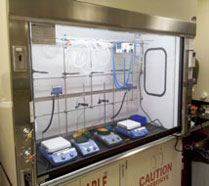 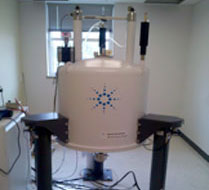 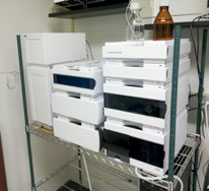 The CIDD medicinal chemistry core has five full time, dedicated staff possessing an extensive amount of industry level experience from both the pharmaceutical and contract research areas. The CIDD also has both undergraduate and graduate student researchers supporting program work.

Dr. Stan McHardy is the director of the Center for Innovative Drug Discovery and Professor of Research in the Department of Chemistry. After receiving his Ph.D. in organic chemistry at the University of Utah in 1996, Stan served as a Pfizer Post-Doctoral Research Fellow.  Dr. McHardy has over 23 years’ experience in the pharmaceutical R&D and academic areas of neuroscience, cancer and infectious disease drug discovery, medicinal chemistry and synthesis and process chemistry.  From 1996 to 2006, Stan worked in the department of Neuroscience Medicinal Chemistry at Pfizer Global Research in Groton, Connecticut.  In his roles there, Stan led project teams toward the discovery of several clinical drug candidates in the areas of addiction, schizophrenia, Alzheimer’s and ADHD and managed multi-discovery project teams as Associate Director.  Dr. McHardy joined Southwest Research Institute in 2006 and served as the Assistant Director of the division and was responsible for developing a strategy that ensured continued growth of exploratory and discovery research programs in synthesis and medicinal chemistry.  Dr. McHardy joined UTSA in July 2012 as the first director of the Center for Innovative Drug Discovery.  In his capacity as director, Stan has established a state-recognized core medicinal chemistry/drug discovery facility on the campus of UTSA and developed state and national research collaborations with both academic and private industry partners, securing >$17M in collaborative extramural funding to date.  Currently, the private, state and federally funded collaborative research programs in Dr. McHardy’s CIDD labs are focused on various small molecule drug discovery approaches to cancer, psychotherapeutic and neurodegenerative diseases and infectious diseases.  Dr. McHardy has 37 peer reviewed publications in the area of synthesis, medicinal chemistry and drug discovery and is inventor or co-inventor on 26 patents.

Dr. Hua-Yu (Leo) Wang currently works as a Special Research Associate at the Center for Innovative Drug Discovery (CIDD). Leo obtained his Ph.D. in organic chemistry at Northeastern University in 2012 and continued on with his post-doctoral training at the University of Texas Southwestern Medical Center. Dr. Wang has over 7 years of experience in organic synthesis, natural product synthesis and medicinal chemistry which encompassed the study of novel small molecule therapeutics for the treatment of cancer, neurological and infectious diseases.  During his graduate studies at West Virginia University and Northeastern University from 2007 to 2012, Leo has worked on several cancer related programs that were heavily involved in the development of new synthetic methodology to study the structure-activity relationship of the carbohydrate stereochemistry found in natural products such as digitoxin and resin glycosides family. In addition to synthesis Leo helped establish the cell culture lab which provides hands-on in vitro testing of synthesized compounds against various cancer cell lines. Dr. Wang published 16 peer reviewed articles in the area of synthesis, medicinal chemistry and drug discovery during his graduate studies.  Dr. Wang joined UT Southwestern Medical Center as a post-doctoral research fellow from 2012 to 2015, and worked on the structure-activity relationship study and development of a novel oxidative phosphorylation inhibitor that targets glioblastoma, which led to a patent application and a pending publication.  In September 2015 Dr. Wang joined UTSA as the Special Research Associate of the CIDD. In his role there, Leo provides high-level synthesis and medicinal chemistry research, as well as intellectual contribution to multiple CIDD research programs, CRO, and grant writing. Since 2015 Dr. Wang has published 6 peer reviewed articles and is co-inventor of 4 patents.

Karinel Nieves-Merced is a research scientist associate IV at the Center for Innovative Drug Discovery. She obtained her BSc. in chemistry at the University of Puerto Rico, Río Piedras campus. She then received her Ph.D. in organic chemistry in 2016 from the same institution under the guidance of Dr. Abimael D. Rodríguez. Her work included the design and total synthesis of anti-tubercular abeo-sterols and functionalized amphilectane diterpenes.  Dr. Nieves joined the Center for Innovative Drug Discovery in 2017.  She has been working in the design, synthesis and structure-activity relationship studies of novel EYA2 inhibitors for triple negative breast cancer. This work has led to several pending publications. Furthermore, she has been involved in the custom synthesis of known and new molecules for private clients. Dr. Nieves has four peer reviewed publications in the area of natural products and synthesis.

Mr. Michael Tidwell is a synthetic organic and medicinal chemist with the Center for Innovative Drug Discovery. Michael has a total of 16 years’ experience. His focus has been in the design and synthesis of drug candidates to support the development of structure activity relationships for hit-to-lead and lead optimization efforts.  While obtaining his B.S. in Chemistry from Stephen F. Austin State University he worked on the synthesis of the glycoside of indole acetic acid, a plant growth hormone under the direction of Dr. Roger Case, Ph.D.  Michael obtained his M.S. in Chemistry at Lamar University in 2002 with Dr. Stephen Fearnley, Ph.D. where he completed a thesis on new methodology for the synthesis of biologically active C-Aryl glycosides via an aryl silane mediated Friedel-Crafts annulation.  Michael worked in neuroscience drug discovery at Eli Lilly and Company as an Organic Chemist and Assistant Senior Organic Chemist from 2003-2009.  During his tenure at Eli Lilly and Company, he worked on numerous lead optimization efforts in the therapeutic areas of obesity, migraine, and pain achieving at least five candidate selections.  Michael joined the Pharmaceuticals and Bioengineering Department at Southwest Research Institute in 2009 as a Research Scientist.  With SwRI, he contributed to a wide variety of medicinal chemistry programs. Most extensively, Michael worked on SwRI’s organophosphorous nerve agent antidote programs including both charged pyridinium oximes and noncharged, CNS-bioavailable oximes.  In addition, he assisted with the development of a multi-step, enantioselective route to tetrandrine analogs for the treatment of Ebola virus infection.  He is a co-inventor on four patents on oxime antidotes for OPNA-inhibited AChE.  In addition, he is a co-inventor on four patents with Eli Lilly and Company regarding 5HT2C agonists, 5HT7 antagonists, and CB2 agonists.  Michael joined the Center for Innovative Drug Discovery at UTSA in October 2017 as a Research Scientist Associate IV and since that time has been tasked with the design and synthesis of small molecule anti-cancer agents.

Mr. Bismarck Campos is a Research Scientist Associate IV for the Center for Innovative Drug Discovery (CIDD) in the Department of Chemistry. Mr. Campos received his B.Sc. in chemistry at the University of Texas at San Antonio in 2016. Mr. Campos has 12+ years of research laboratory experience focused on synthetic organic chemistry, and medicinal chemistry. Mr. Campos has extensive experience in the synthesis and development of small molecules as drug candidates for multiple therapeutic approaches to anti-cancer compounds and infectious diseases.  From 2000 to 2007, Bismarck worked in the department of Research & Development for Ablestik Laboratories in Rancho Dominguez, California.  In his roles there, Bismarck was responsible for the preparation and process of chemical formulations in the adhesives semiconductor industry.  Mr. Campos joined Southwest Research Institute in 2007 where he conducted synthesis and medicinal chemistry research on new and existing private and government contracts in the synthesis and process chemistry section. Mr. Campos executed pilot plant large-scale synthesis operation and played a crucial role in the development of non-charge oxime compounds which protect against organophosphate poisoning both peripherally and in the central nervous system.  Mr. Campos joined UTSA in October 2012 as a Research Scientist Associate III for the CIDD. Mr. Campos is responsible for executing synthesis work to prepare and characterize the targeted compounds for CIDD multiple medicinal chemistry programs. Mr. Campos provides custom synthesis and medicinal chemistry research for small molecule drug discovery. Mr. Campos is currently executing high quality science on various cancer programs under CPRIT grant. Mr. Campos is an inventor or co-inventor on five United States Patents.

Doug E. Frantz currently holds the Max and Minnie Tomerlin Distinguished Professorship in Chemistry at The University of Texas at San Antonio. He earned his Ph.D. in organic chemistry at Texas A&M University in 1998 with Dr. Dan Singleton where he studied the mechanistic details of organocuprate conjugate additions using natural abundance kinetic isotope effects (KIEs) and NMR techniques.  He then moved on to do a post-doctoral fellowship with Dr. Erick Carreira at the ETH Zürich in Zürich, Switzerland where he discovered and developed the Zn-catalyzed asymmetric acetylide addition to aldehydes resulting in 8 publications in 14 months.  Doug then joined the Process Research group at Merck & Co., in 2000 in Rahway, NJ followed by a move to Wayne, PA to help start up a brand new site for Merck where he remained until 2005.  While at Merck, he helped develop robust syntheses for several clinical candidates across a wide-range of therapeutic areas including diabetes, chronic pain, oncology, and neurodegeneration.  He decided to return to Texas in 2005 to pursue a career in academia where he joined the faculty in the Department of Biochemistry at the University of Texas Southwestern Medical Center at Dallas as a research assistant professor and Director of the Synthetic Chemistry Core Facility.  In 2009, he was recruited to the Department of Chemistry at UTSA where he has help recruit outstanding colleagues in organic chemistry that has rapidly established the department as one of the premier places for organic chemistry in Texas.  His research group continues to pursue their mutual interests in asymmetric catalysis, physical organic chemistry, stem cell differentiation, and neurodegeneration.  He is also Co-Founder of the Center for Innovative Drug Discovery (CIDD), a joint drug discovery initiative between UTSA and the UT Health Science Center in San Antonio.  Doug has received several awards including the Thieme Journal Award (2017), Lilly Open Innovation Drug Discovery Outstanding Collaborator Award (2014), and the Max and Minnie Tomerlin Young Investigator Award (2010).  He also served as Co-Chair of the GRC on Organic Reactions and Processes (2014) and has established the TexSyn conference in 2013 with Prof. Mike Krische at UT Austin to highlight the outstanding research in synthetic organic chemistry in the state of Texas every two years.

The University of Texas at San Antonio